Therefore, the purpose of this study is the statistical analysis of the 33 indicators of hydrologic alterations (IHA) in five main groups (magnitude-duration-timing-frequency-rate of change) in stations affected by the Bustan, Golestan and Voshmgir dams in the before and after periods of construction these dams using the IHA software version 7/1 and investigate is the climate variables change. For this purpose, the calibration and validation of the HBV hydrological model in the before period of Bustan, Golestan and Voshmgir dams construction and the amount of daily discharge in the after period of dams construction was simulated. The results of simulation of the affected stations of the dam with HBV model showed that the model has good performance in both periods (calibration and validation) in the before period of dams construction. The results showed that in the calibration period of Oghan, Gonbad, Ghazaghli and Aqqala hydrometric stations with Nash coefficient of 0/52, 0/67, 0/80 and 0/61, respectively, as well as in the validation period of Oghan, Gonbad, Ghazaghli and Aqqala hydrometric stations, respectively have the best performance with Nash coefficient of 0/59, 0/41, 0/58 and 0/54, respectively. According to the results, hydrological indicators of monthly flow show that in Oghan station under the influence of Bustan dam about 30%, in Gonbad and Ghazaghli stations under the influence of Golestan dam about 52% and 30%, respectively, and in Aqqala station downstream of the dam and 49% in the river. 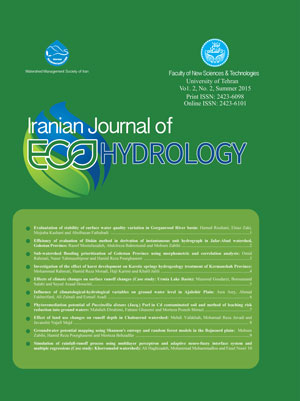